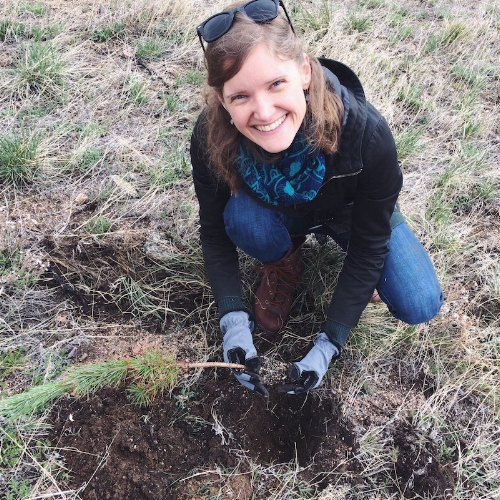 With the planting season in California at a close now until the fall, we're looking back at the range of projects we've completed there over the last few months, focusing on wildfire restoration. California has lost over 1 million acres to forest fires in 2017 alone, with millions more trees dying due to drought, infestations, and tree diseases associated with climate change. So, we've been busy doing all we can to help.

Special thanks to the El Dorado County & Georgetown Divide Resource Conservation Districts, the California Native Plant Society, and the California Department of Forestry and Fire Protection for bringing together the necessary networks and resources in planting and distributing over 320K native trees! And of course, thanks to our incredible donors and business partners for helping to fund these vital restoration projects. Direct impact for California came from our Treecember efforts just before the holidays in 2017, as well as from House of Marley, Trafalgar Travel, and CIT.

So here's a breakdown of all the details. 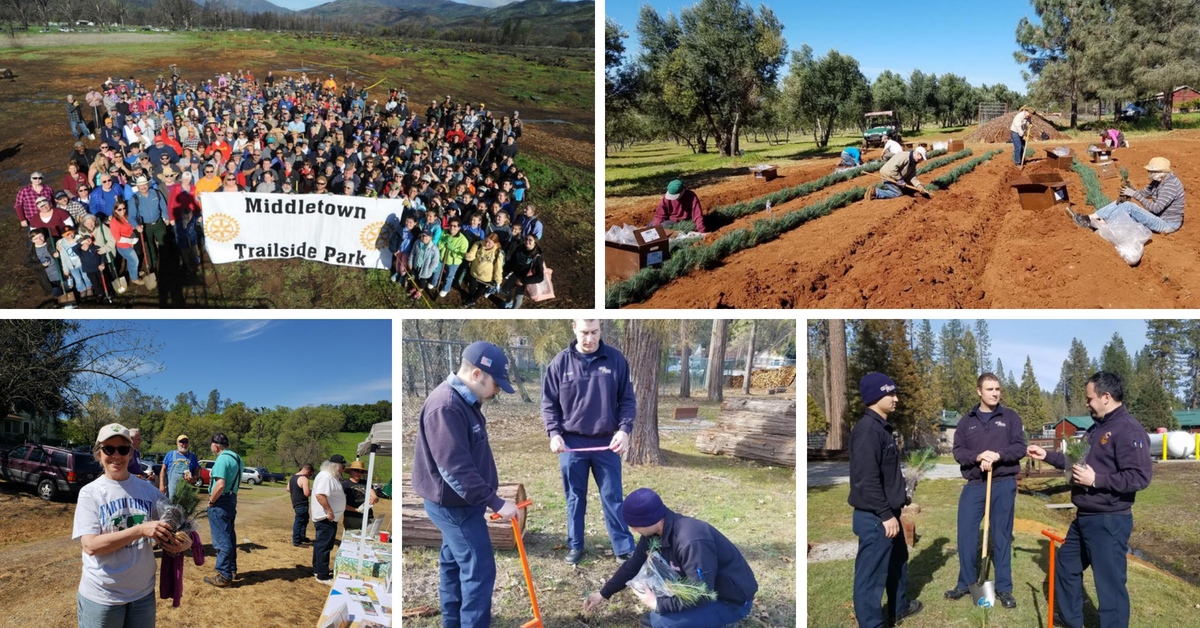 In September and October of 2014, the King Fire burned 97,717 acres of land. The majority of the burn area is managed by the US Forest Service. However, there were also about 48 private, non-industrial, landowners in the burn area. These owners suffered losses ranging from complete mortality of trees and destruction of homes and other structures, to relatively minor losses of forest cover. The Georgetown Resource Conservation District has been working with these landowners to restore the landscape and prepare the land for reforestation. During the spring of 2018, almost 950 acres were replanted with the partnership of One Tree Planted. A variety of species were planted including Ponderosa Pine, Douglas fir, Incense cedar, Sugar pine, White fir, and Giant sequoia.

In July and August 2014, the Sand Fire burned 4,240 acres of land. The burn area is mostly comprised of private lands consisting of parcels ranging insize from 10 to 400 acres. The Roman Catholic Church and private landowners own the majority of the land effected by the fire.

The pre-fire vegetation within the perimeter of the Sand Fire was a complex mosaic of communities dominated by oaks, pines, several other tree species, chaparral and grassland. The communities targeted for restoration in this management plan were dominated by ponderosa pine trees. Most of the stands that burned were between 20-75 years old, with some as old as 120 years.

The overall objective of this project is to begin the process of reversing the ecological, economic, environmental, aesthetic, and social impacts of the Sand Fire. The Restoration effort included the removal and disposal of standing and down dead trees and brush, additional measures deemed necessary to prepare sites for planting. The total proposed project area is 308 acres.

Planting was done with Ponderosa Pine, Douglas fir, and Incense cedar from appropriate seed zones at a density of up to 300 trees/acre depending on landowner preferences and site conditions. During the spring of 2018, almost 300 acres were replanted with the partnership of OneTreePlanted. In all, over 72,858 trees were planted here. 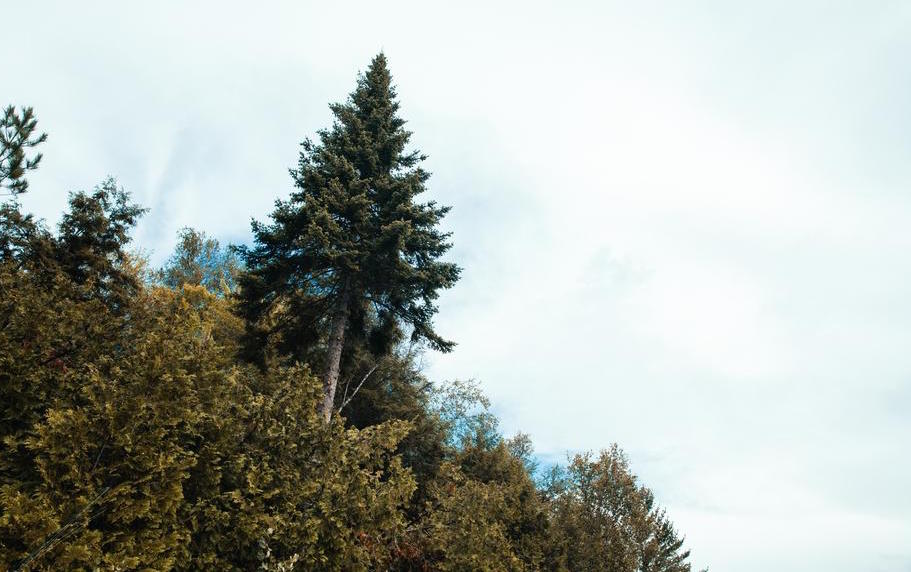 Calaveras County, over the last three years, had been impacted by the 70,000 + acre Butte Fire and conifer tree mortality due to drought and beetle infestations. The newly formed RCD (Resource Conservation District) saw an opportunity to provide a quality service to landowners with this project. They decided to purchase seedlings and advertise a tree giveaway for landowners who suffered tree loss to get trees to be planted on their property.

They had no idea how many people would show up, but the first event was a huge success! 1,500 seedlings were distributed within 3 hours, and a second event was scheduled to distribute over 10,000 more trees.  The species included Ponderosa pine, Douglas fir, Incense cedar, and Sugar pine.

1,700 Trees planted in Amador County, California, as part of a Community Reforestation Collaborative

Amador County, like much of the Sierra Nevada area, has been affected by the bark beetle epidemic. Many landowners have lost a majority of their trees to this epidemic. The Amador Resource Conservation District (ARCD) is working with the El Dorado County RCD and One Tree Planted in an effort to provide trees to landowners to reforest areas that have been affected by the increased death of conifers in recent years.

The ARCD has also partnered with the Mother Lode Land Trust (MLLT) and the ARCD/ACRA  Community Garden to incorporate tree distribution into an already planned Earth Day event being held at the Community Garden. ARCD provided trees to residents who have reforestation needs on a first come first serve basis . Each person was given written instructions and best management practices for planting and tending their new tree(s). Workshops were hosted throughout the day to demonstrate tree planting techniques. These workshops were supervised by Registered Professional Foresters. 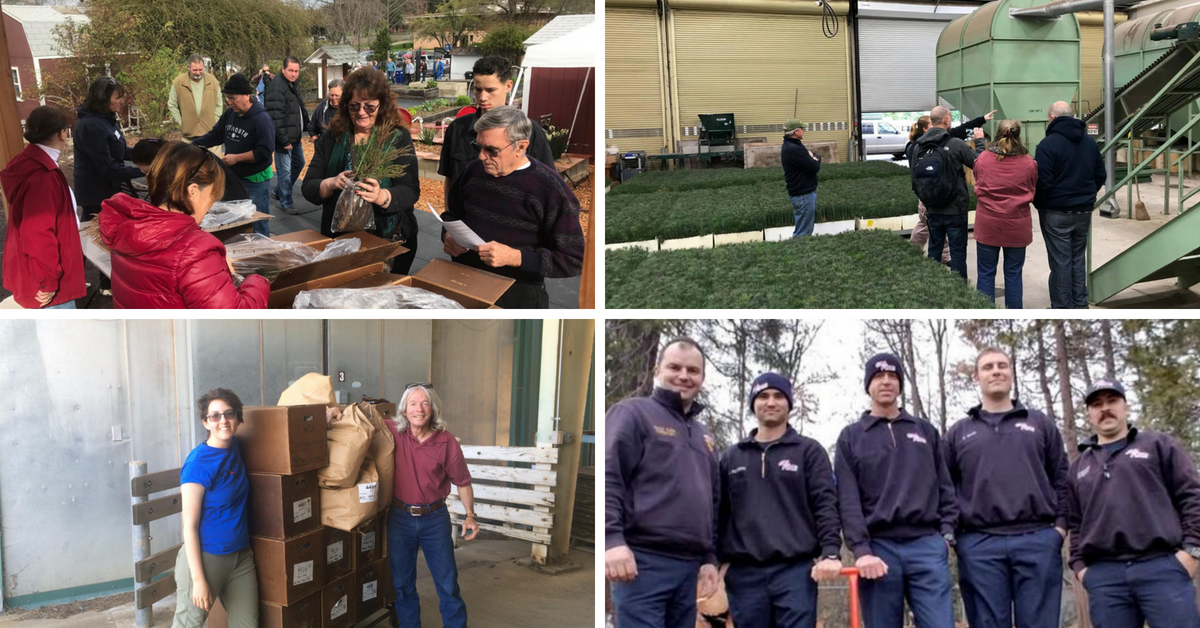 The Forest Foundation educates Californians about sustainable forests and how they protect the environment and the economy. The National Forest Foundation has outlined its national program while California Forest Foundation addresses statewide efforts. America is blessed with a stunning diversity of forests. From urbanites in big cities to families in rural towns, we are all connected to our forests. Natural disasters such as wildfire, insects and disease outbreaks are jeopardizing the very things  that make our forests so wonderful,  the majestic  trees  that grow from Maine to California.

That's why the National Forest Foundation is undertaking an ambitious effort to plant 50 million trees across their National Forests by 2023. By planting 50 million trees they are investing in healthy forests for today and for future generations. This year, the California Forest Foundation distributed 3,280 seedlings in partnership with One Tree Planted to those affected by tree mortality or wildfire at this year's State Fair. Information regarding the care and planting techniques was provided with the seedlings to help ensure they survive.

Through collaborative efforts, the National and California Forest Foundations will protect the watersheds that provides life's most sustaining resource for all those who depend on everything our forests provide. And as these trees grow, they'll help to balance global climate change and ensure wildlife have healthy places to live. 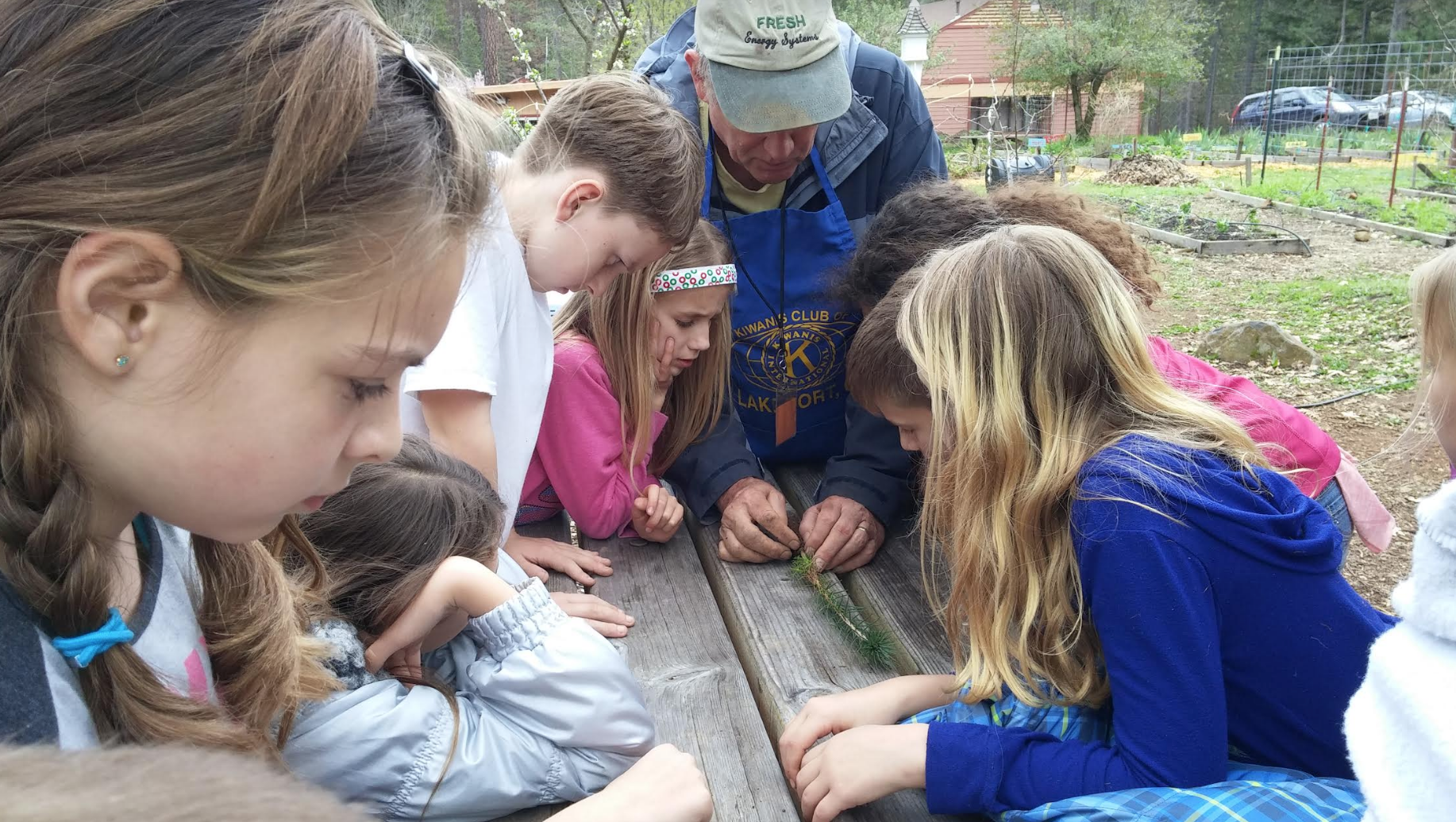 42,912 trees planted throughout the Sierra Nevada, California, to restore forestland destroyed by wildfire, drought, and infestations

California's forested landscape has been ravaged by large scale severe wildfires and devastating bark beetle attacks over the past several years. These catastrophic events have been exacerbated by several years of drought. Surveys conducted by the U.S. Forest Service estimate that over 129 million trees died due to drought and insect attacks in the Sierra Nevada since 2010. Wildfires such as the Rim Fire (257,000 acres), King Fire (97,000 acres), Butte Fire (71,000) acres, and most recently, the Tubbs, Atlas, and Redwood Valley fires in Napa, Sonoma, Solano, and Mendocino Counties have created an immense backlog of deforested acres requiring restoration. Research on reforestation needs conducted by the El Dorado Resource Conservation District has estimated an annual demand of up to one million seedlings for replanting trees on private forestland alone. There is additional demand for seedlings to plant public land, including National Forests and state and federal parks.

The El Dorado County Resource Conservation District has developed a collaborative program that provides technical assistance to private landowners planning reforestation projects. Through a contractual arrangement with the U.S. Forest Service's Placerville Nursery the District arranges for the propagation of seedlings ordered by landowners. Acting as an intermediary between private landowners and the U.S. Forest Service, the District enables access to high quality seedlings that would not otherwise be available to private parties.

One of the District's key collaborators is the California Department of Forestry and Fire Protection (CAL FIRE). In 2017, CAL FIRE placed an order with the District for over 80,000 seedlings to be used for replanting forest land in the Sierra Nevada affected by drought and bark beetles. The response from landowners throughout the State was more than anticipated and resulted in an additional 42,430 seedlings requested by private landowners to restore their land. At a critical stage, the partnership between CAL FIRE, OneTreePlanted and the El Dorado County RCD resulted in providing residents of several Sierra Nevada Counties with seedlings to restore their land. In addition, various organizations throughout the State including local activists and organizations such as Rotary Clubs, RCD's, Master Gardner's and other organized events where seedlings were distributed to residents and landowners in Calaveras, Amador, Fresno, El Dorado, Placer, Madera and Mariposa Counties, all hard hit by the bark beetle epidemic. The collaborative program has provided seedlings for reforestation and restoration projects in several areas hard hit by wildfire. These areas include the Rancho Cuyamaca State Park in San Diego County, the Valley Fire in Lake County and the Redwood Valley Fire in Mendocino County. In most cases, the District has worked through local Resource Conservation Districts to consolidate orders from individual landowners.

1,516 seedlings were given to students of UC Berkley's College of Natural Resources - Ecosystem Management and Forestry (EMF) during their CAL DAY event as an educational opportunity.

22,260 trees were planted in Madera & Fresno Counties as part of their seedling distribution and reforestation programs.

Let's restore the damage done by forest fires and other causes of deforestation around the world.