How Did We Get Here? Reflecting On the Current Fires in California

After a record-breaking wildfire season last year, we’re once again seeing California fires on the rise this month. The Apple Fire in Riverside county is the largest active fire currently, having burned 26,850 acres so far, followed by the Gold Fire (22, 634 acres), and Hog fire (9,564 acres). To put that in perspective, a soccer field is just about 2 acres, so the damage already done is significant and is likely to continue over the next couple of months.

To stay up to date with the current fire California fire news, see the map and alerts from Cal Fire.

As the situation progresses, the question on a lot of our minds is “how did we get here?” 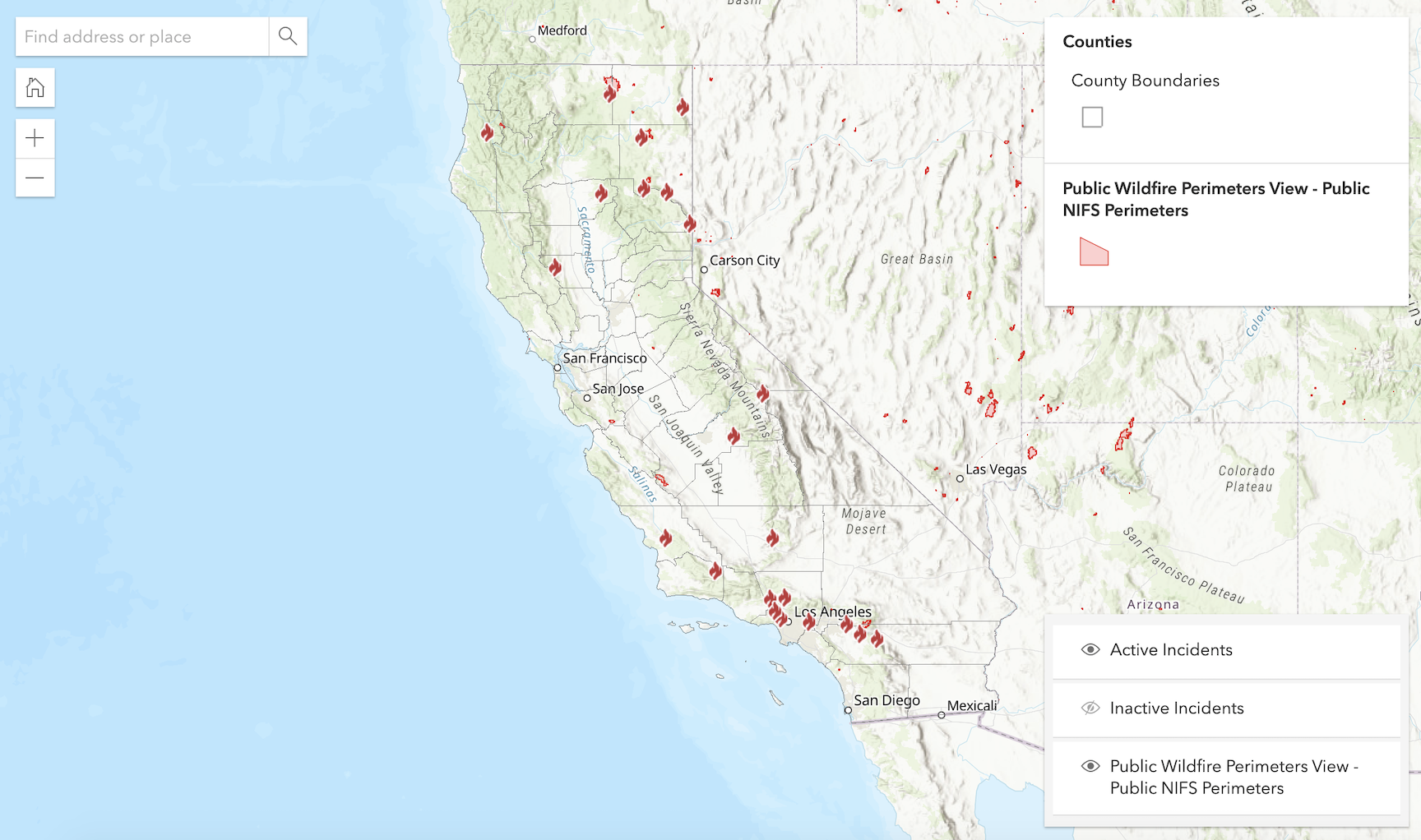 To answer that we have to go back 11 million years, when the Pacific and North American plates began pushing against each other, forming the Sierra Nevada. This great mountain range separates desert from ocean and creates incredible climatic and topographic diversity, making California one of 35 biodiversity hotspots on the planet. And with more native plants than any other state in the union, 1/3 of which are found nowhere else on earth, there’s no doubt that the title is deserved. But the varied terrain that makes California so beautiful also makes it difficult for firefighters, who regularly have to navigate deep canyons and steep hills while battling historic blazes.

California Has Adapted to Fire in the Landscape

For millions of years, small-medium sized fires were a regular feature of the landscape, thinning vegetation and stimulating regeneration. As a result, many of California’s ecosystems are fire-adapted — and some native plant and tree species like giant sequoias, oaks, pines, and chaparral actually require fire to reproduce, germinate, and establish themselves. But these delicate systems often operate on specific cycles — for example, a chaparral stand may have a burn cycle ranging anywhere from 30 to 100 years, while a ponderosa pine stand may only need a few years between each fire. With massive wildfires carving a destructive path through the state with increasing frequency, California’s iconic forests are under threat. 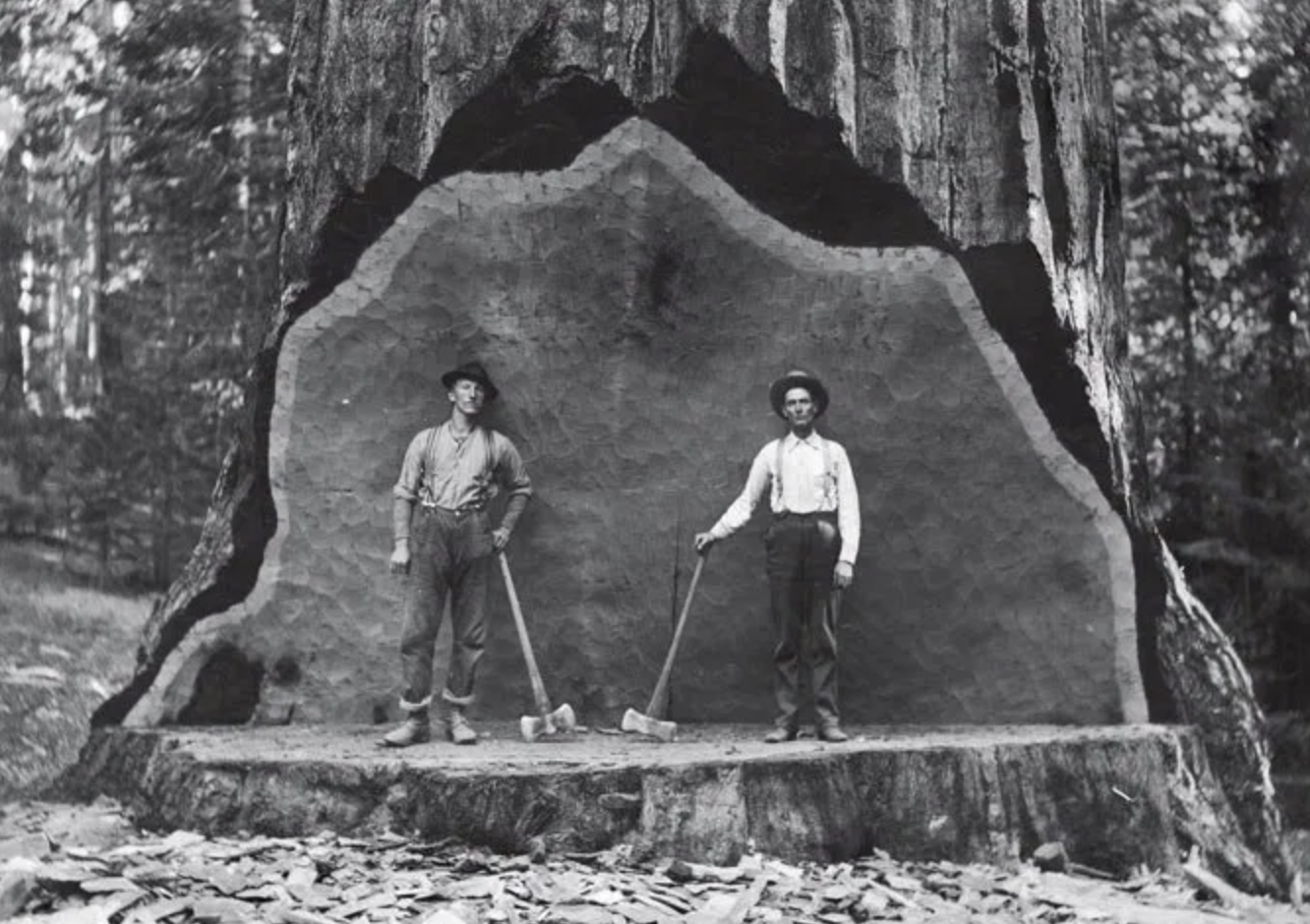 Around 13,000 years ago, Native Americans settled in California — and for about 1,000 generations, they lived in harmony with nature. Because they observed and understood the integral role that fire plays there, they created fire burns periodically to reduce pests and improve acorn crops. In doing so, they also helped to keep the ecosystem healthy, thinning the forests and allowing fire-dependent species to germinate and grow.

In 1849, all of that changed when Europeans flooded California, hacking down primary forests to build infrastructure and settlements. And as they probed further and further into the wilderness, their influence spread with them. Fearful of fire, they deployed every fire suppression tactic they could to keep it at bay. And after the Great Fire of 1910 burned 3 million acres across North Idaho, Western Montana, Eastern Washington, and Southeast British Columbia, the newly established United States Forest Service only doubled down on those efforts, rolling out their classic “Smokey the Bear” campaign. The intention was safety and disaster prevention. After all, how could you not do all you can to save precious wildlife when it looks like this? 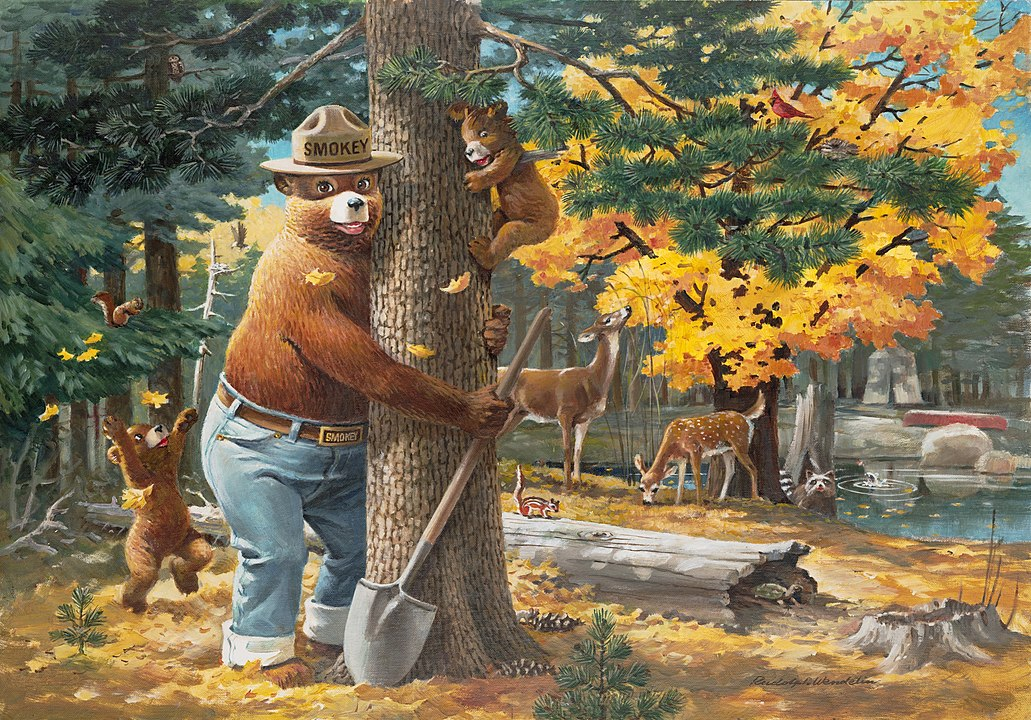 Realizing the Impact of Fire Suppression

After a century of widespread and systematic fire suppression, deforestation, and settlement, coupled with the increasing effects of climate change, we’re reaping the results. California’s ecosystems have changed profoundly — and in areas like the western Sierra Nevada, pine forests are being replaced with oak. In other places, fir trees have encroached into traditional oak woodlands, effectively choking them out. Practically at risk year round, Californian firefighters have little time to recover between “seasons”. And veteran firefighters say that the fires they used to fight were smaller and less intense. As a result, California consistently surpasses their yearly firefighting budgets, with little left over for the important work of fire prevention.

At the same time, summertime air temperatures in California have warmed by over 3.5 degrees F since the late 1800s. As a result, the area burned across California during the summertime is about 8X higher today than it was in the 1970s. And since the 1980s, the size and ferocity of the fires that sweep across the state have only trended upward. These hotter and drier summertime conditions set the stage for catastrophic fires burning well through the fall, until winter rains at last bring respite. According to CalFire, “California has 78 more annual "fire days" now than it had 50 years ago.“ 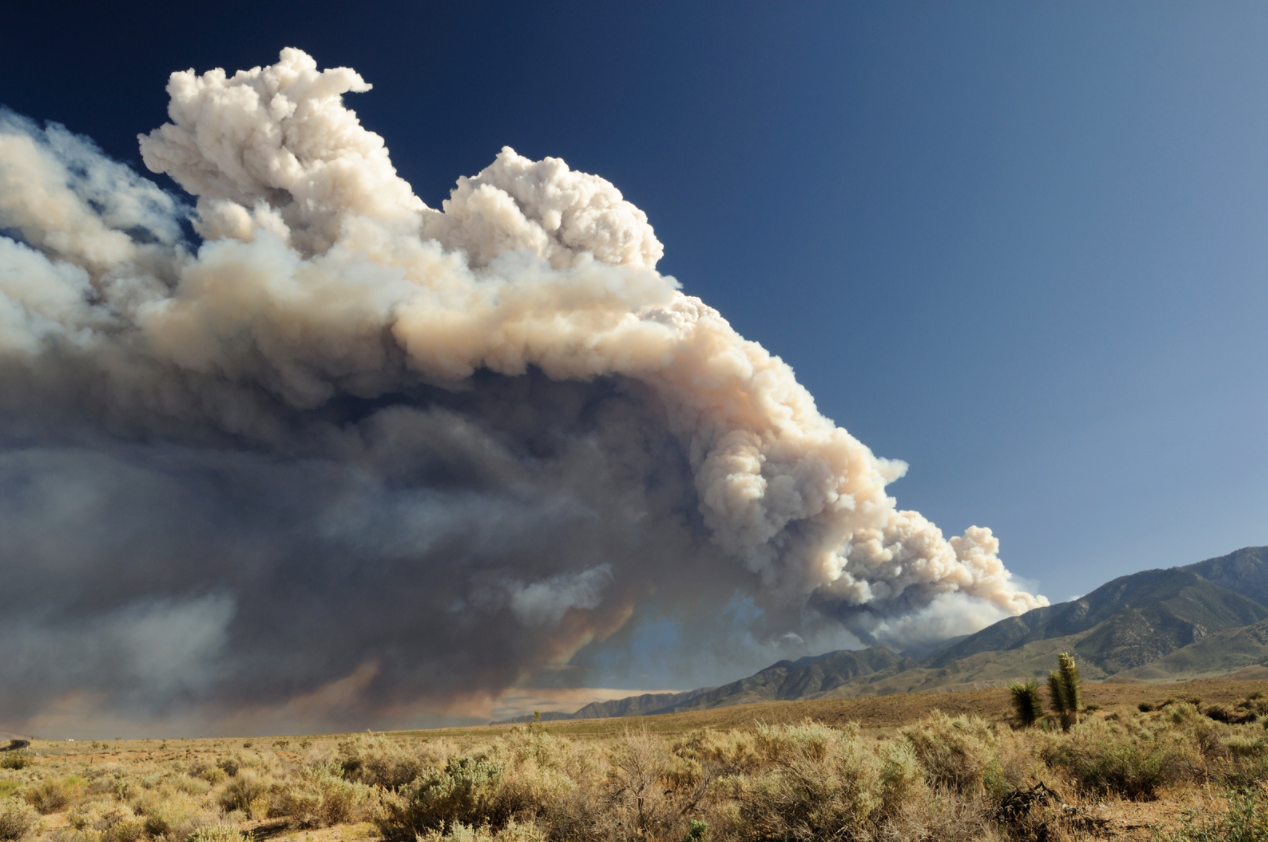 As the The New York Times reports, 9 of the 10 largest fires in California’s history have occurred in the last 10 years — and it’s no coincidence that 9 of the 10 hottest years on record have been recorded since 2000. In 2017, the Thomas fire brought record-breaking levels of destruction, burning over 1.3 million acres. In 2018, the Camp Fire stole that title, raging across northern California and burning 1.8 million acres, decimating 14,000 homes, killing 85 people, and destroying the town of Paradise. Last year, wildfires burned over 250,000 acres, causing 80 billion dollars in damage and economic loss.

The Compounding Effects for Ecosystems

So what gives? As California’s climate has gotten hotter and drier, it has led to less snowpack in the Sierras, less runoff in the spring, and less retained moisture. And in an increasingly warming world, ecosystems could continue to dry out without beneficial management. If not addressed, water could continue to dry out and, consequently, fires would only get more intense, frequent, and widespread. Specifically, severe droughts and heat waves dry out soils, kill millions of trees, and weaken others, leaving them susceptible to insect infestation and disease, which kills millions more.

These conditions lead to a massive accumulation of parched vegetation and dry wood fuel, creating the perfect conditions for massive fires to ignite and spread. And as strong winds sweep over the landscape, they help the fires accelerate quickly, start new blazes by transporting embers, and prevent air support from flying in. To make matters more difficult, people are moving farther and farther into the Wildland Urban Interface, which puts them directly in the path of some of the deadliest wildfires in recorded history. 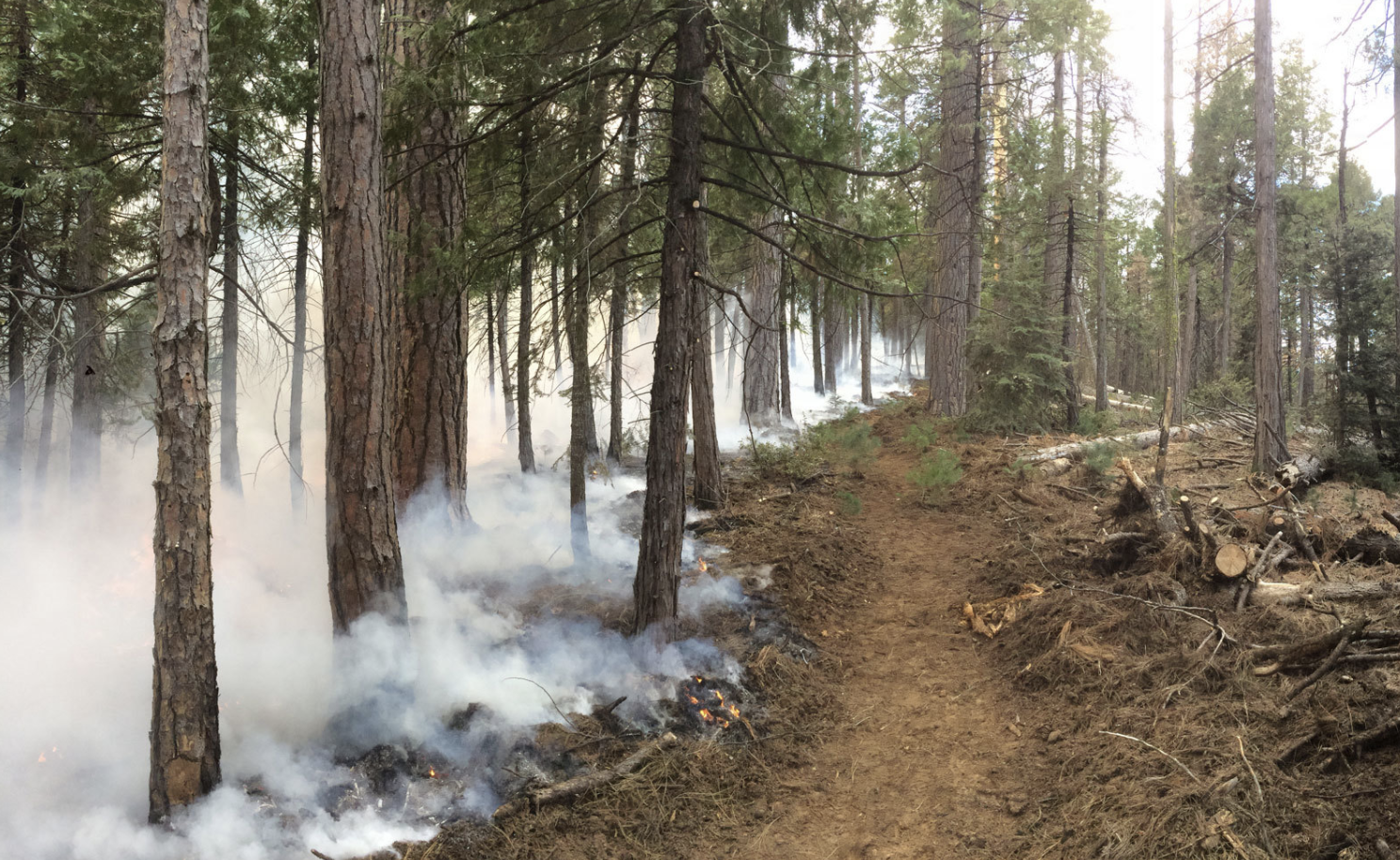 So What Can we Do About it?

From urban planning to controlled burns, foresters, planners, conservationists, and legislators are working hard to address the factors that make wildfires more frequent and widespread. And in light of this interdisciplinary approach, some feel cautiously optimistic about the future. They’re learning how to fix some of the mistakes from the past, and how to prepare for the future by improving forest management to ensure that the forests are healthier and more resilient to climate change. As Lenya Quinn-Davidson, Director of the Northern California Prescribed Fire Council said, “we’ve been in a 100 year gap in fire in the landscape and the result of that is what we see today.”

One well-studied management technique is prescribed burning, which is the use of fire to meet specific objectives — in this case, reducing fuels on the ground by burning in the understory of the forest. It’s a steady, methodical process that helps to protect areas - and trees - that would otherwise go up in smoke. And the results speak for themselves. In many cases, when a wildfire hits the edge of a prescribed burn site, the character of the fire changes, moving down from the tree crowns and into the understory, sparing many trees and slowing spread. In other areas, the forest service is manually trimming and removing overgrown vegetation.

Reforestation is Essential in Landscape Restoration

And tree planters also have a role to play: in many cases, reforestation is necessary after wildfires because, if allowed to, invasive species will quickly establish dominance within newly cleared landscapes, transforming ecologically diverse forests into bush lands of lower ecological, wildlife, and carbon sequestration value. This negatively impacts biodiversity and provides fuel for future burns. By assisting in the regeneration process, we give native ecosystems a helping hand in restoring healthy, beautiful, and biodiverse forests. Here's just one example of how we've planted trees in California for forest fire restoration.

And where reforestation occurs, it is conducted wisely in everything from the tree species chosen to the distance between trees to the exact location where trees are being planted so that they do not create the potential for future harm if another fire comes along in the area. 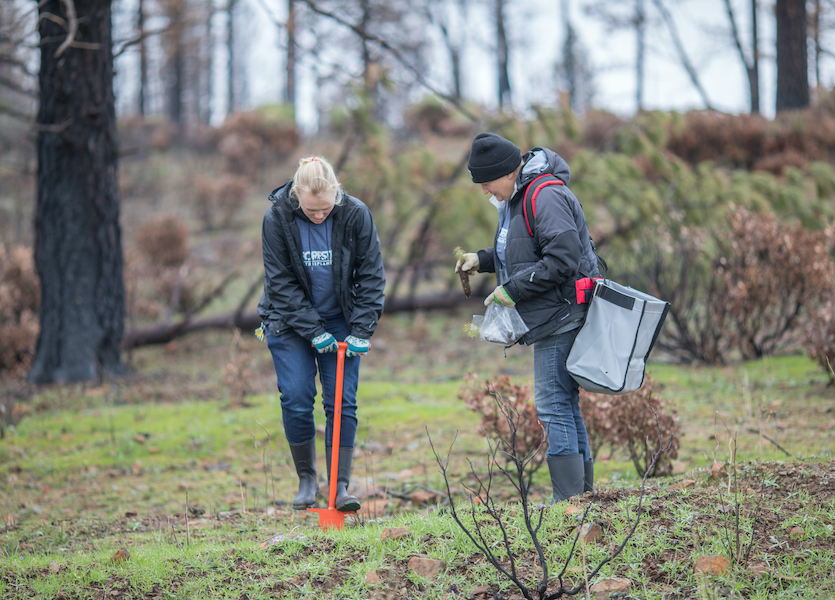 Sometimes fast-growing species are planted to speed this process up. In other cases, pioneer species that can tolerate poor conditions are introduced to help enrich the soil so that more sensitive native species can return. Some that commonly get planted are ponderosa pine, jeffrey pine, colter pine, sugar pine, douglas fir, incense cedar, a small amount of red and white fir, and giant sequoia.

Thanks to climate change, historic deforestation and degradation, fire suppression, and settlement, fires are burning longer and more intensely than ever before, testing the ability of ecosystems to regenerate without human intervention. But by planting trees once the forests are ready to recover, we’re able to give nature a leg - and a root - up. Want to join us? Plant a tree in California today!