The State of the World's Forests in 2020

Things are changing fast in nature, and while we often hear bits and pieces about what's going on with forests, these stories tend to come in region-based or event-based headlines that don't always show us the big picture. That's why we appreciate the UN Food and Agriculture Organization's annual State of the World's Forests report. Created in partnership with the UN Environment Programme (UNEP) and the UNEP World Conservation Monitoring Centre, the ultimate findings are clear: alarming rates of deforestation and degradation necessitate urgent action to protect the biodiversity of the world’s forests.

Pretty sure you already knew that, so let's dive a little deeper.

Scholars as far back as Darwin have recognized that the ecology and biodiversity of forested regions have a powerful impact on the nature of human societies, human distribution across landscapes, and the history of civilizations. And from Paubrasilia echinata (red dye) in South America to Myristica fragrans (nutmeg) in Indonesia, the harvest and trade of forest plants has supported — and sometimes driven — the spread of human societies around the globe.

We still depend on forests and biodiversity, although some feel that dependence more acutely. Over 100 million people in the EU regularly consume wild food, and some 2.4 billion use wood-based energy for cooking. And it doesn’t stop there — forests also provide over 86 million green jobs and support the livelihoods of many more. And an estimated 880 million depend on forests for basic survival, collecting fuelwood and producing charcoal for cooking. And for the 252 million people that survive on less than $1.25/day in countries with high forest cover and biodiversity, the health of their forests is literally a life or death issue. 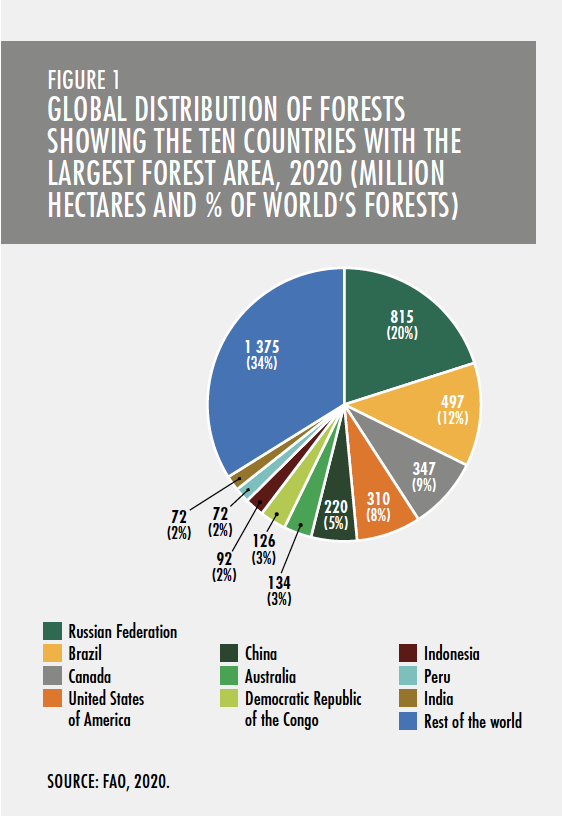 Deforestation is an Ongoing Issue

Although the rate of deforestation has decreased over the last 30 years, it hasn’t decreased enough — and over 420 million hectares of forest have been lost since 1990. In 2019 we lost 11.9 million hectares in the tropics, which is the equivalent of losing a football pitch full of biodiverse forests every 6 seconds.

In the last 5 years, the rate of deforestation has slowed to around 10 million hectares lost each year, but that’s still a lot of trees getting cut down. As a result, global forest area decreased by 178 million hectares between 1990 and 2020, which is an area about the size of Libya. And we aren’t moving fast enough to meet the targets set by the UN Strategic Plan for Forests — to increase global forest cover by 3% by 2030.

But while deforestation continues in some areas, new forests are being established through natural expansion and tree planting efforts. For that reason, the net loss of forest area is technically lower than the rate of deforestation. Still, large and often monocultural tree plantations do not make up for the loss of primary forests, or “naturally regenerated forests of native tree species where there are no clearly visible indications of human activity and ecological processes are not significantly disturbed.” And since 1990, we have lost over 80 million acres of them. Another 100 million acres are threatened by forest fires, pests, diseases, invasive species, drought, and extreme weather events.

Well-intentioned planting efforts often fall far short of creating the hospitable environment that wildlife needs to move back in. So while reforestation is important, conservation of existing primary forests has a greater impact on biodiversity. 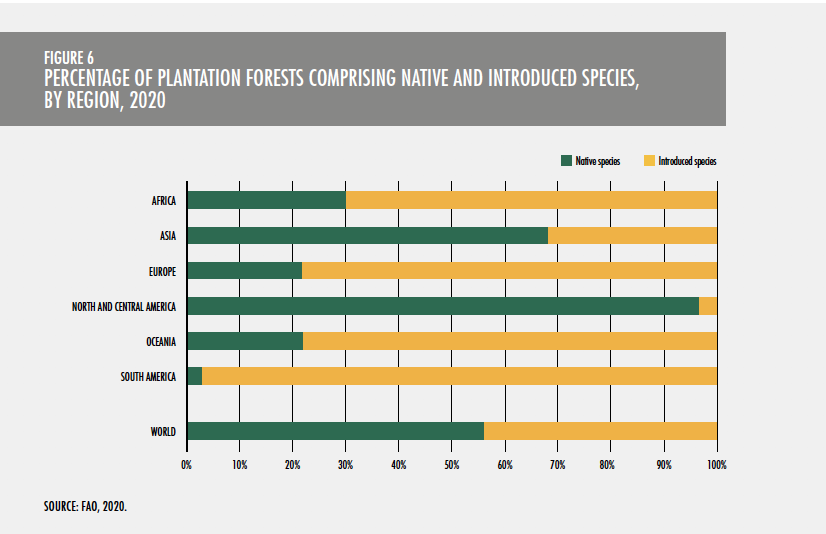 So What Is the State of the World’s Forests?

Almost 1/2 of the planet's forested area is relatively intact, and around 1/3 of that is primary forest — most of which can be found in Brazil, Canada, China, Russia, and the U.S. Generally speaking, tropical rainforests and coniferous forests are the least fragmented, while subtropical dry forests and temperate oceanic forests are among the most fragmented.

Roughly 80% of the world’s forest area remains in patches larger than 1 million hectares — but the remaining 20% is comprised of over 34 million patches across the world. And the vast majority of that is less than 1,000 hectares in size. These small, fragmented patches are much more susceptible to natural and human-driven degradation.

As a result of this fragmentation: 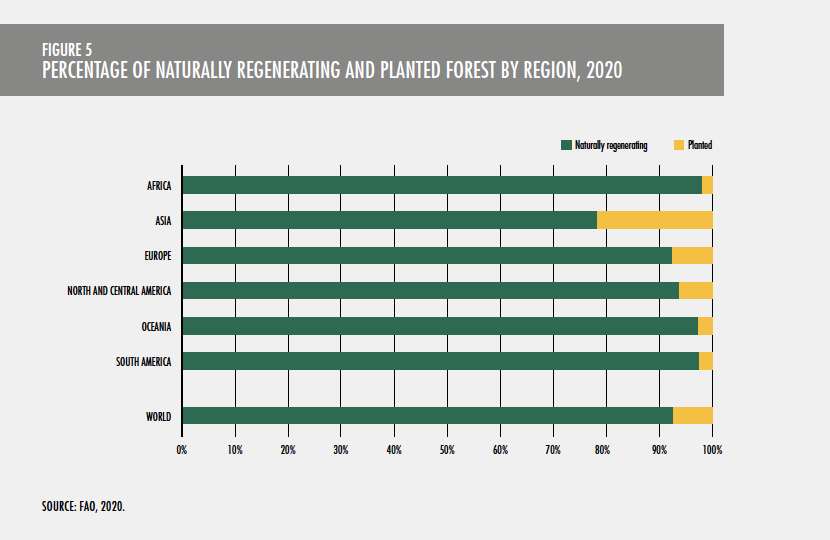 There are many culprits, but agricultural expansion continues to be the biggest one, driving massive deforestation, fragmentation, and biodiversity loss — with large-scale commercial operations like cattle ranching, soy, and oil palm responsible for 40% of tropical deforestation between 2000 and 2010. Local subsistence agriculture accounts for another whopping 33%.

And the cruel irony? The resilience of human food systems is entirely reliant on the very biodiversity that is systematically destroyed to expand them. This includes dryland-adapted shrub and tree species that help combat desertification, forest-dwelling insects, bats, and birds that pollinate crops, trees with extensive root systems that prevent soil erosion in mountainous regions, and mangroves that protect against flooding in coastal areas. And with the increasing impacts of climate change on food systems, the importance of healthy, intact forests is put into sharp focus.

The Importance of Biodiversity

The biodiversity of forests varies according to factors like forest type, geography, climate, soils, and human use. Most forest habitats in temperate regions like the U.S., Canada, and Europe support relatively few animals and tree species, with a tendency towards those that have large geographical distributions. The forests of Africa, South America, and Southeast Asia, along with the lowland forests of Australia, coastal Brazil, the Caribbean Islands, Central America, and insular Southeast Asia support significantly more. And the species that call these forests home are often hyper adapted to them, which puts them at increased risk of extinction if their homes get cut down.

Areas that are densely populated and heavily farmed like Europe, parts of Bangladesh, China, India, and North America have less intact biodiversity. And areas like Northern Africa, southern Australia, coastal Brazil, Madagascar, and South Africa are on track to join them if current deforestation trends continue. 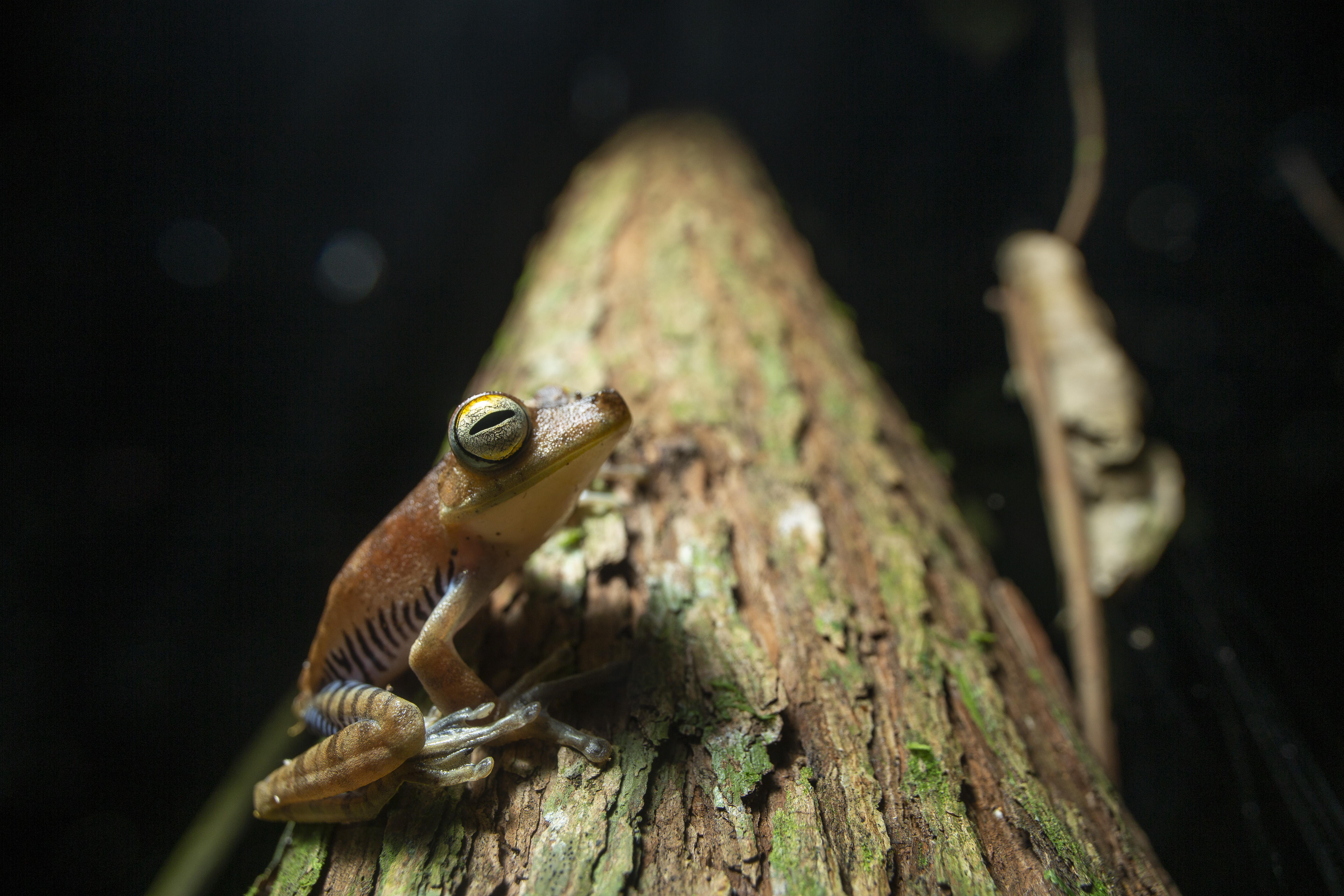 There Are So Many Reasons to Protect Forests

Forests are home to most of our planetary biodiversity — and not just the iconic ones like the jaguar of Latin America, the bears of North America, the gorillas of Central Africa, the lemurs of Madagascar, the panda bears of China, the Philippine Eagle, and the koalas of Australia.

In fact, despite covering just 31% of the global land area, the world’s forests provide habitat for the vast majority of the terrestrial plant and animal species known to man (and woman). That means they contain over 60,000 tree species, 5,000 (80%) amphibian species, 7,500 (75%) bird species, and 3,700 (68%) mammal species. In tropical forests, the numbers are even more staggering, including 60% of all vascular plants — 28,000 of which are known medicinals. And that’s only what we know about. We’ve identified some 144,000 species of fungi, but scientists estimate that the vast majority (93%) are yet to be discovered. 25% of these species can only thrive in primary forests — which when coupled with the fact that much of our forests are fragmented, paints a troubling picture.

In addition to protecting biodiversity, trees pull carbon from the atmosphere and sequester it via photosynthesis, filter and absorb air pollutants, release oxygen for us to breathe, hold the soil together, grow food and medicine, protect us from UV rays, slow the flow of stormwater, and so much more.

So there you have it. It's complicated! Which is why the FAO needed 215 pages to summarize all this information. But our directive is clear, it is of vital importance to conserve and restore the world's forests.

Feeling inspired to improve the state of the world’s forests? Consider planting a tree with us today!